r-anne-dom : a place for me (anne) to leave random blog posts.
Such as:
..knitting, sewing, and other random activities pursued
..Girl Guides of Canada : yep, Guiding Lives Here
..the 4 shops on Etsy : one features quality handmade items; the second has lots of patterns, & crafting supplies; the third is stocked with Vintage; and the fourth is guiding flowers.
Enjoy the r-anne-domness!

Here are a few of the Girl Guide scarves for Guiders (leaders) in Canada.

This first one is the International scarf, worn when travelling outside Canada, though I think we should wear it much more often because it really is a nice scarf. 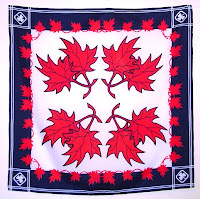 I like to tie it so that its folded diagonally to make a strip, then make a knot at the centre of the scarf that will be front and centre, and then the ends are tied behind the neck.  Some day I'll get a photo of that.

I also have this one - I bought it off ebay and I love the maple leaves and the Trefoil.
I have no idea when it was created or worn - or by which members of Girl Guides of Canada.  I'd like to know though. I did see a similar one on ebay once - and even grabbed the photo (I'd give credit to whoever was selling it but that was many years ago). I've never seen another one like these.

There is a new Girl Guide scarf for leaders in Canada this year - a tad on the pricey side, but since the quantity they'll sell is miniscule compared to the number of girls' scarves sold, I can see that producing them probably cost more. 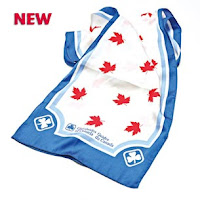 It is quite similar to the one I bought on ebay and I think I like my ebay one better - with the Trefoils throughout the scarf.

What are your thoughts? Do you have a scarf for Guiders that isn't here? Leave a comment.
Maybe you know about those maple leaf and Trefoil scarves! I'd love to hear from you.
4 comments: Links to this post

Pop Can Tabs Make a Difference

Here in Southwestern Ontario, we DO collect pop can tabs!

If you search, you can find reports on the web that say that collecting pop can tabs is a hoax. That may be true elsewhere in the world, but in Ontario, children get wheelchairs with pop can tabs.

The most recent wheelchair provided was to Cristian Picard in Chatham.

And next, pop can tabs will go for a wheelchair for Julia Gower of Ilderton (see photo below).

So save your pop can tabs! 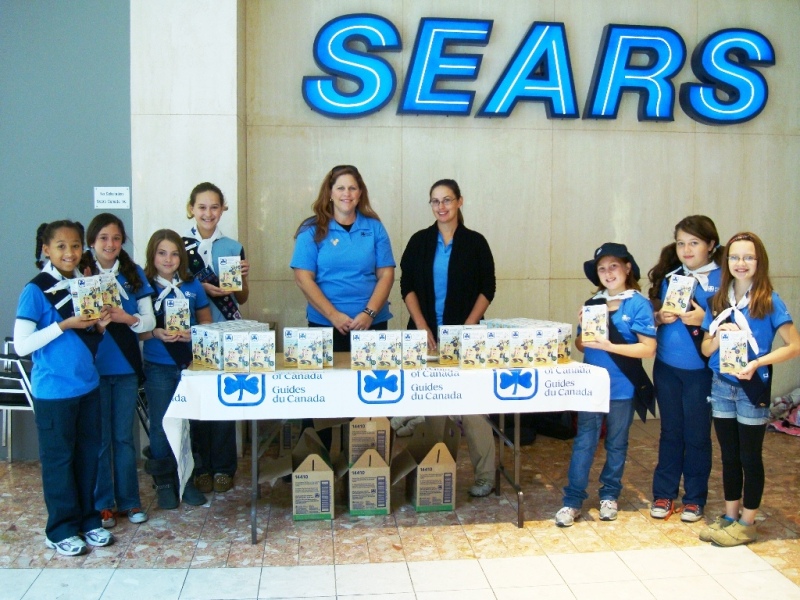 Shout out to the 55th London Rangers and the 82nd London Guides! 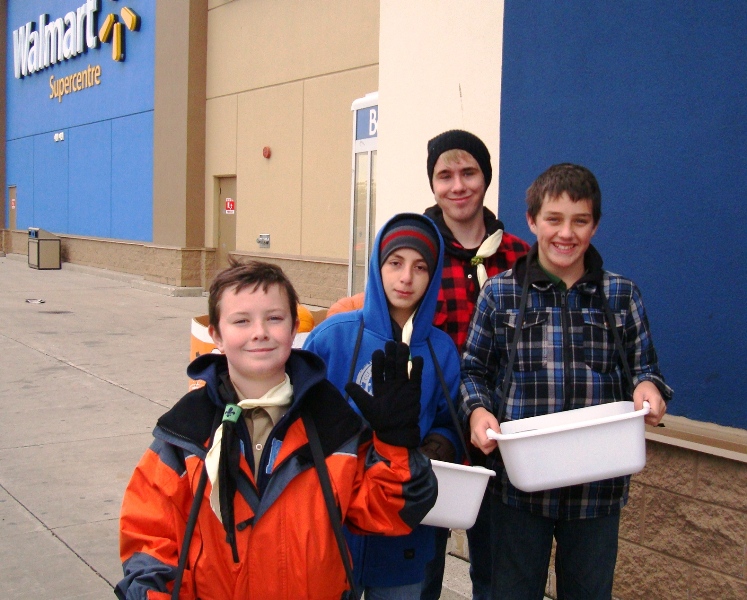 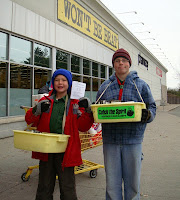 Many thanks to Sears, Wal-mart, No Frills and every other business allowing Girl Guides to sell cookies and Scouts Canada to sell apples!

And more from my morning ... 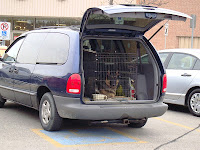 I noticed the back of this van open in the mall parking lot ... um, no one is going to go near it I bet!

And this cool mustang in my side view mirror (yes, we were stopped at the time!) 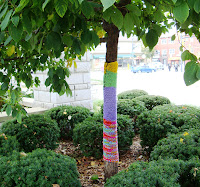 I was pleasantly surprised to see Yarn Bombing at Victoria Park in downtown London a week or so ago!

I didn't have my camera, but my friend did - and you can see yarn on the trees in the background!  look carefully!  She has more photos here on her blog. 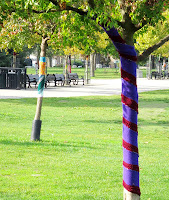 I'd heard so much about yarn bombing in other countries around the world, so it was neat to see it close to home!

Here is all that is remaining in one of the trees! 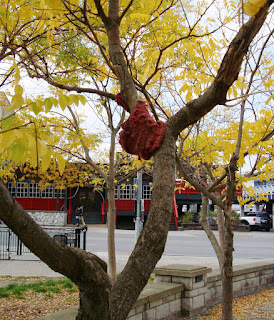 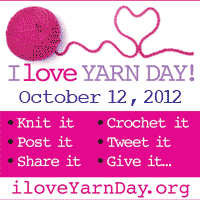 International Day of the GIRL

International Day of the Girl

Following campaigns by organizations including WAGGGS, its Member Organizations, Plan and Save the Children, the United Nations declared 11 October as International Day of the Girl from the year 2012 onward.

Girl Guides of Canada is thrilled to be part of the first ever International Day of the Girl on October 11.
Make sure you join in!
Ten million Girl Guides and Girl Scouts will join together to imagine the world we want for girls and to help make it a reality.

On Oct. 11, watch our Day of the Girl music playlist on our YouTube channel, with GGC girls serving as video hostesses and introducing their favourite songs that promote confidence, courage and resourcefulness in girls. 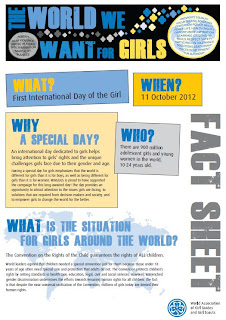 Scroll down to find the Free patterns section.

ennadoolf
r-anne-dom : a place for me (anne) to leave random blog posts.

(you know what to do with that!)

What's On My Needles?

A Stitch in Time! What am I sewing now? 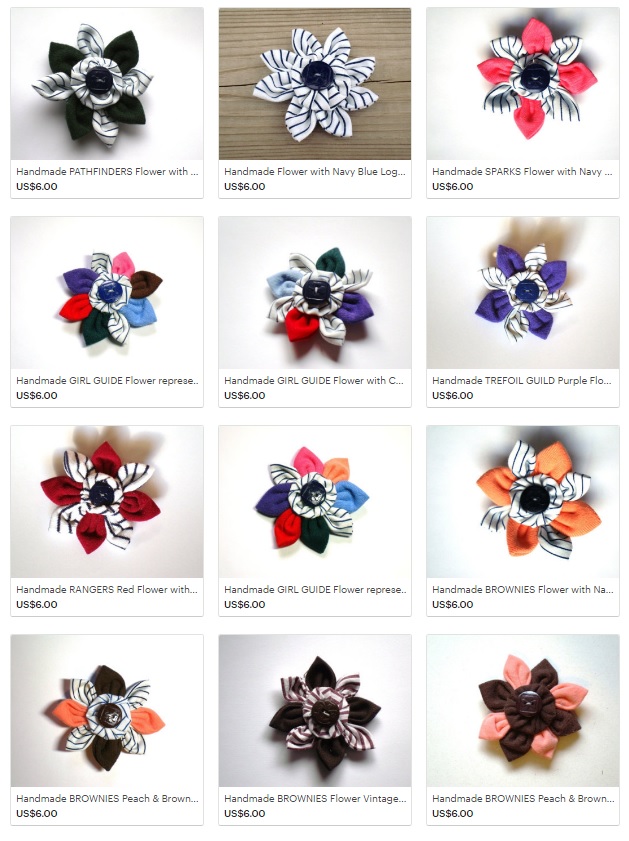 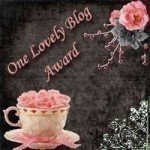 I received this award from Designs By Velvet. Thanks!

Do you sew? Join us at mysewingcircle.com

Do you knit or crochet? Join us at ravelry.com

This Barbie Gown was donated to Wellspring auction at Jonathons

International Shipping - Places I've Shipped To, from my Etsy Shops

...and the following US states:

...and the following Canadian provinces